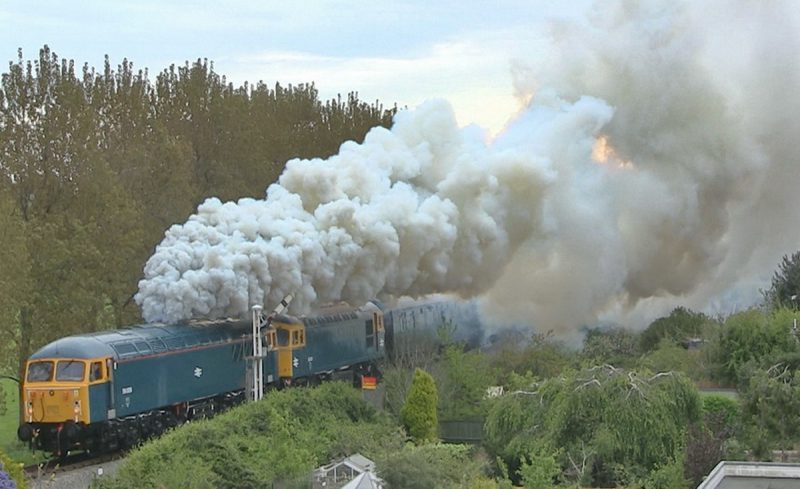 Late February 2017 represents a major milestone in both the history of the Class 56 locomotives, and the Class 56 Group’s very own 56006 in particular.  This is because late February 2017 is the 40th anniversary of 56006’s entry into revenue earning service with British Rail at Tinsley Depot in South Yorkshire, and as 56006 was also the first Class 56 to enter service, thus this also represents the entry of the class into British Rail service as well.

We’ve created a variation of the group logo to celebrate this and we should soon have some group merchandise available with the new logo (see the main site photo of 56103 for a look at the logo, and have a look in the shop section of the website where new products will appear as they are available)

While the first Class 56s were built in 1976, remedial work was required to them before they could enter full service, which depending on which source you use, occurred on either the 25th or 27th February 1977, hence why 2017, not 2016, is the 40th anniversary of this major milestone.

56006 lead a fairly uneventful existence during her first couple of decades, but in January 1995, she gained the name “Ferrybridge C Power Station”, being named after the power station that was located near Knottingley in West Yorkshire.  With this naming, she became one of only six Romanian Grids to be named.  This naming took place without a ceremony at Immingham Depot, and 56006 became the second locomotive to carry the name “Ferrybridge C Power Station”, after it had previously been applied to 56089 on 15th September 1991.

Then in 1999, 56006 was selected to represent the Class 56s at the legendary “EWS Classic Traction Event” on the East Lancs Railway from Friday 10th to Sunday 12th September 1999, having been specially repainted into her original BR Blue livery, at Old Oak Common depot in West London in August 1999.

As a result of her popularity at this event, 56006 joined several of the other heritage locomotives that starred at that event, to form the EWS Heritage Locomotive Pool.  This high profile role meant that 56006 became the unofficial ambassador for the Class 56, attending numerous other events.  In fact, so important a locomotive had 56006 become, that when she was eventually withdrawn from service on 1st December 2003, EWS offered her to the National Railway Museum at York, who unbelievably turned down the chance to become the custodians of this famous locomotive !!!!

Luckily for us all, this wasn’t the end of the story, as after attending an event at Barrow Hill Roundhouse Railway Centre, 56006 stayed on for a visit that would eventually stretch on for nearly eight years, instead of making a one way journey to the scrapyard.  Preservation finally beckoned for 56006 in November 2012, when she was purchased by the Class 56 Group.  This purchase was partly funded by money from the hire fees earned by the Group’s other Class 56, 56301, and partly from a loan provided to the Group by one of its long serving members.  Initially 56006 continued being based at Barrow Hill, but on 25th July 2014 it was moved to UK Rail Leasing’s Leicester Depot, where restoration and repairs could be carried out more effectively. Today 56006 is still based at Leicester Depot (along with 56301), but represents the Class 56s and the Class 56 Group at diesel galas and open days all over the country.

SPECIAL NOTE – Leicester Depot is a working depot and in the interests of safety the depot is out of bounds to visiting railway enthusiasts.