As you may recall 56006 was running around for a very long time a crazed cab quaterlight on the drivers side at No 1 end. Unfortunately this was broken a few summers ago when some vandals threw a stone through it. The broken glass was removed and a standard Romanian piece of glazing offered into the aperture. Unfortunately it didn’t fit and a piece of hardboard had to be cut to size and fitted and sealed into the aperture. 56006 has run for quite some time with this ‘ distinctive’ look.

Eventually the drier weather allowed us to remove the wooden piece and use it to have a piece of glass specially made to fit.

Several hundred pounds later the glass was offered into the aperture but just didn’t want to go into the space. Eventually it cracked as attempts were made to get it to fit. A piece of Lexan ( toughened plastic) was fitted and that is what is in the loco today.

The problem was put down to the fact 56006 was built in Romania and each cab was probably different from the next.

However a photograph was circulated on facebook which seems to offer an explanation. 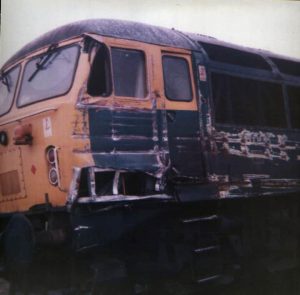 This damage is at the  same end of the loco as we have the problem. The loco looks like its had a run in with a MGR hopper and the top edge of the hopper has gouged into the top of the frame where the quarterlight glass was proving very difficult to fit. I’d assumed this was a picture from an incident in Tees yard in 2003 but as Lee Davies pointed out the loco in this picture doesn’t have an orange cantrail stripe which would mean it  is a picture of an earlier accident.

Do any members know of any incidents affecting 56006 ? If so we’d love to know any details – it won’t make that blooming glass fit, but it could help expalin why it doesn’t fit.

It also explains why one of the markerlights throws a beam pointing upwards rather than straight and level .