Unfortunately ,as I’m sure anyone following the progress of 56301 on Friday will already know , the test run was terminated short of its destination due to a fault on 56301. The fault was on the load regulator side of the control system and caused a loss of power . The train was moved into a loop near  Kilnhurst and the 60 brought the train back to Chaddesden.

56301 was brought back to Leicester on Saturday afternoon.

We are hopeful the fault is easily rectified and was a result of over 2 years out of use rather than any serious problem.   56301 had made good time to the point the problem occured.

Disappointing as it is, we are encouraged the loco went out on test and is very close to being restored to full working order and ready to resume her mainline career after the lengthy sabatical at Leicester.

Watch this space for more news, and some photographs from the test run, once I obtain permission from the photographers to use them.

The trip to Long Marston cancelled this morning. 56301 still gone out on test, but heading North to Chaddesden to collect a rake of wagons then on to York Holgate.

56301 should have a trip out tomorrow after almost two years out of use.

Loco should lead on outward trip with a Class 60 in tow.

Return trip is 14:32 with a rake of wagons for Chaddesden Sidings.

Unfortunately for operating reasons the 56 won’t lead up Lickey on the return, – so if you see any reports the 56 has failed it is actually planned to be tucked inside the 60.

The 56 should run light back to Leicester after dropping off the wagons, but no timings currently available. 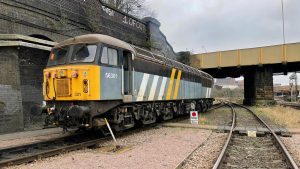