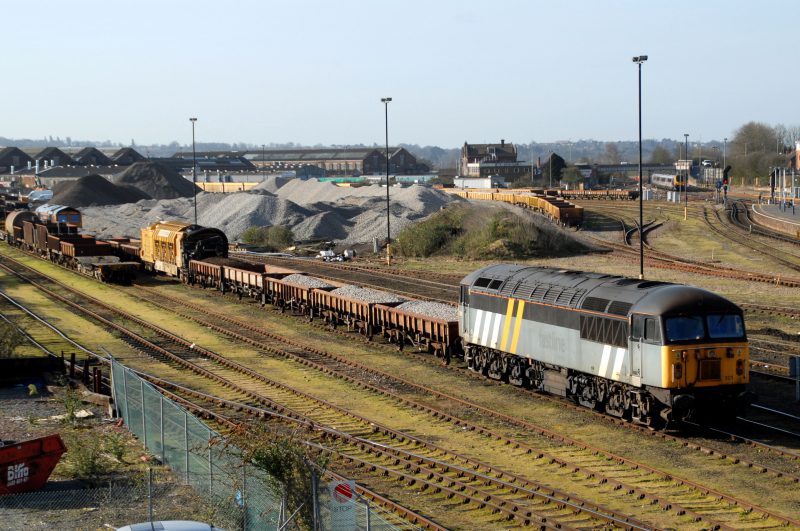 We continue to work with a number of major UK operators, including:

UKRL, based at Leicester, are a dynamic and innovative rail vehicle engineering and fleet management company. They also provide traction to the UK rail industry. The company do an excellent job assisting in maintaining and preparing 56301 for mainline hire work too.

Based next to the Midland Main Line at Leicester, their business is developing a growing reputation for quality, service and reliability. They pride themselves on their ‘can do’ attitude which underpins all of their rail engineering and network service solutions.

56081, 56098 & 56104 were previously on their books as operational, mainline certified locomotives before being sold to GBRf in 2018. They also previously owned a wealth of stored class 56 locomotives but the majority of these have similarly been sold on to GBRf.

DC Rail is an established freight company with a proven track record of service delivery to meet all of the freight management and movement requirements of their clients within the UK.

Previously based at Washwood Heath in Birmingham, they are now located primarily at Leicester but are also currently in the process of opening a new site at Willesden F Sidings in North West London too.

56301 has been hired by DC Rail on many occasions in the past, for a number of freight workings and stock moves as well as light engine locomotive moves.

They also have a small fleet of dedicated locomotives which have been modified with electrical brake translation equipment and a range of coupler types to enable direct coupling to, and through automatic brake control of, most UK EMU types. This negates the need to use historic barrier and translator type vehicles.

ROG have hired 56301 and a small number of other class 56 locomotives for unit and other stock movements in the past. As of August 2018 they have also been heavily involved in the transfer of stored GBRf class 56s between Leicester Depot and the East Midlands Distribution Centre at Castle Donington, as well as facilitating the transfer of 56301 to this site for secure storage whilst Leicester Depot is used to stable passenger trains during the Derby remodeling blockade.

Colas Rail’s growing presence in the UK railfreight industry and the addition of class 56 traction to their mainline fleet has helped lead the mini-renaissance of these locomotives over the last five years. As well as owning and operating the much established Pullman Rail facility at Cardiff Canton, their locos and operations cover a wide range of locations across the country including Westbury, Nottingham Eastcroft (the premises of which is shared with Boden Rail Engineering Ltd), Hinksey Yard (Oxford), Derby Railway Technical Centre (RTC), Immingham / Barnetby, Carlisle, Rugby and Crewe Basford Hall.

The stored class 56s can be found in the COLS pool, which (as of August 2018) contains just 56051. Said loco is currently undergoing a heavy overhaul with a view to being returned to service in late 2018.

Floyd (based in Hungary)

Floyd are a Hungarian private railway company founded in 2004, who own three former UK-based class 56s. Their headquarters are in Budapest, and the majority of Floyd is owned by Euro Gate. Their locomotives are usually black with the name of the company written on a pink stripe, although both of their active class 56s wear a largely black colour scheme with blue and red stripes. The company mainly deals with the transit and transport of goods, with daily services to the Budapest Intermodal Logistics Center and Hamburg.

The company own and operate 56101 (running number 659 001) and 56115 (659 002), along with 56117 (659 003) which remains in store.  56115 has recently been overhauled and returned to traffic, having undergone collision damage repairs which saw one of its cabs replaced and refitted. The donor cab was provided by UK Rail Leasing’s stored 56106 and was ‘surgically removed’ on site at Leicester, before being exported to Hungary. 56117 is stored, still carries the defunct Fertis livery and is not presently operational.