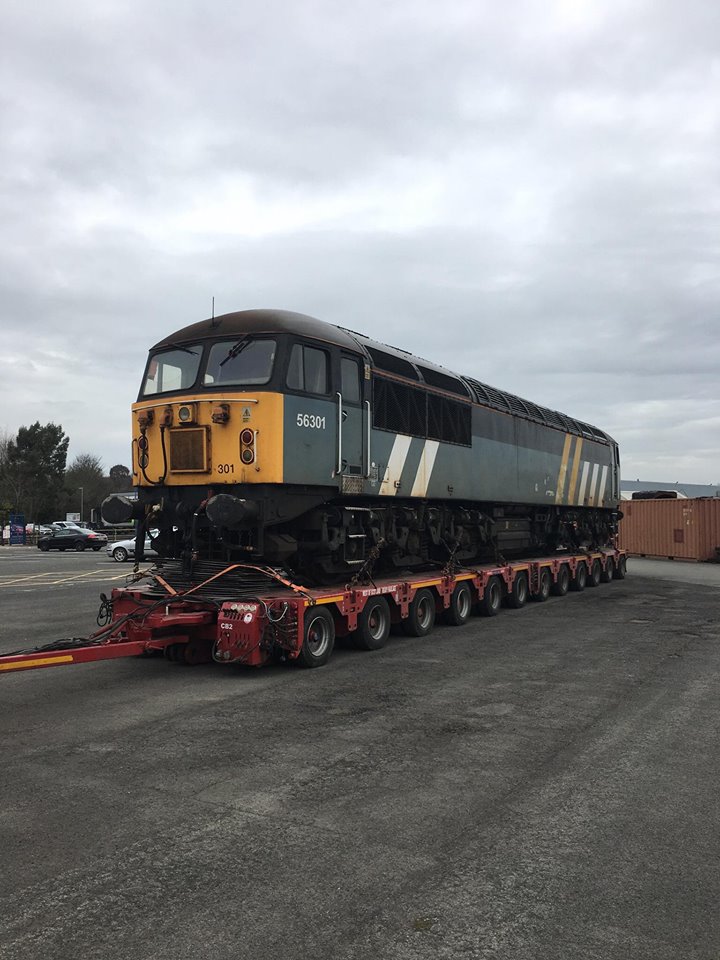 56301 is observed on the outskirts of Birmingham on 8th April 2018, during a layover in it’s journey by road from Bletchley to Tyseley. With thanks to David Rawlings for use of the image.

Mainline class 56 movements for today (Tues) are as follows:

56096 is reported to have ventured out onto the mainline for the first time in several weeks yesterday, running light engine from Nottingham Eastcroft Depot to Toton TMD as 0Z56 early afternoon. The loco has been out of traffic for repairs since 22nd March.

Five of the operational Colas ‘grids’ could be found engaged in engineering duties over the weekend.

Working in top and tail formation, 56078 & 56113 departed Toton with a loaded rail discharge train bound for Market Harborough just before midnight on Sunday. They then performed several rail drops between Market Harborough and Kilby Bridge Junction, before returning to Toton with the empty train just after 0700 on Sunday. After arriving back at Toton, the locos ran light engine to Barnetby. The image below shows 56078 stood at Market Harborough during the early hours of Sunday, whilst the driver awaits permission to draw forward into the possession site. 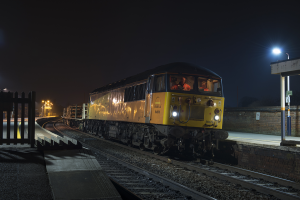 With thanks to Mathew Yardley for the image.

Some 40 miles further East, 56302 could be found paired with fellow Colas ‘type 5’ 60056 in an engineers possession just North of Peterborough, at Werrington Junction. This particular job was in conjunction with Network Rail’s Grade Separation project, which involves construction of a new two-track railway line under the East Coast Main Line at Werrington Junction. This will enable high-speed trains to pass over the Great Northern Great Eastern (GNGE) joint line, removing constraints on the existing timetable. The train, which was comprised of ten MHA ‘Coalfish’ wagons and a single KFA Railvac vehicle, arrived from Doncaster as 6C52 on Saturday night and returned on Sunday afternoon under the same headcode, departing Werrington some 90 minutes ahead of schedule with 56302 at the business end. Commencing on 24th / 25th March, it was scheduled to run for five consecutive weekends, producing a pair of class 60s the first weekend followed by 70816 and 56078 on 31st March / 1st April.

In Scotland, 56087 & 56105 were engaged in a possession at Barnhill (Perth). Arriving as 6X54 during the early hours of Saturday morning from Millerhill, the duo remained there until Sunday night before returning the train to Millerhill.