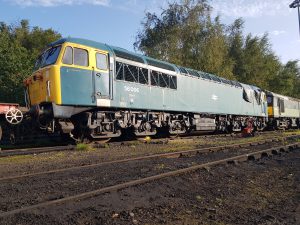 One of the main ones was the topping up of the traction motor gearcase lubricant. This has been checked previously and although there was lubricant in the gearcases it was below the maximum level and needed topping up. This lubricant provides protection between the pinion (on each of the six traction motors)  and the gearwheel which is fitted onto the loco wheelset. The pinion and gear mesh together and lubrication is essential to ensure the high pressures involved do not lead to wear and subsequent failure of either component.

It all sounds rather straight forward so far- just get some lubricant, pour it in until the level is reached ,repeat 5 more times and go for a brew……..

But of course rule number 1 of class 56 preservation comes into play immediately , and that is simply

Rule number 2 also gets a look in too, and that is

” The jobs we thought were going to be problematic or nigh on impossible , will with the right forward planning, enthusiasm , and hard work will become slightly less problematic.”

The lubricant itself , which used to be referred to Motak , is expensive . A 20 litre drum costing over £300. So no spilling it .

And there is the second difficulty-  it is so viscous that if you did tip the 20 litre drum over you’d quite literally have time to go and make a brew and drink it before any of the lubricant actually dribbled onto the floor. It would be like a waterfall, but in very very slow motion.

Third difficulty – it is not only viscous it is incredibly sticky.

Oh and the filling point is not much larger than the  width of your hand and no  you can’t just pour it in as the loco body , traction motor and wheelset combine to make access difficult and yes the loco needs to be over a pit to do the job. Are you getting the picture yet?

As with a lot of things the technique is everything. Fortunately one of our volunteers Alan Flockhart is ex UKRL Leicester and had probably done this very task on our other loco 56301.  Alan assured us he had a technique and with the loco over the pit Alan produced a box of nitrile rubber gloves, a drum of engine oil and the drum of Motak (Or Lodextrol as its modern equivalent is known- available from Morris Lubricants )

Given the gloves have to be changed after only a couple of handfuls its not a quick job but Alan got stuck in (!) and we can now cross it off the list of jobs required on 56006.

One other job was to try and dry out the radiator room floor at number 1 end. This is permanently covered in about 1/2″ (12mm) of water. It does dry out in warm weather leaving a rusty brown powder behind. Given the loco is based in the UK and west of the Pennines its not dry very often.

I’d purchased a syphon pump (with a capacity of a pint and designed for sucking oil out of motorbike engines) and used that to suck up the water from the floor. Several hours and 4 buckets full later I felt reasonably proud of myself. I’d reduced the level to a couple of mm and I felt that would soon dry out as according to the weather forecast we were expecting a spell of decent weather……..

I was  on my hands and knees tidying up when I felt something dripping down the back of my neck. It was raining and water was coming in from somewhere. I looked up and it was coming in through one of the covers used to access the radiator elements from inside the locomotive.  At first I couldn’t understand why and assumed the bolts securing the cover were not fully tightened which was allowing rainwater to seep past. 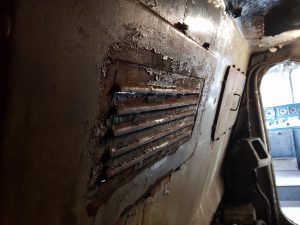 Closer inspection revealed a much more basic problem . As the photograph shows the ventilation louvres in the cover were letting in water because the cover had been fitted upside down. Instead of diverting rainwater the cover was inadvertently channelling rainwater into the locomotive. Removing it, rotating it 180 degrees and refitting seemed to be the simple solution. I hasten to add that the incorrect fitting of the cover had been done by one of the several previous owners (which the log book shows to be EWS  but could even likely go back to the last time the loco went through main works which was Doncaster in 1994 whilst 56006 was a Trainload Coal asset)

Of course rule number 2 kicked in when the last bolts was seized and in my rush to try and get the cover refitted to stop the ongoing thunderstorm entering the loco I snapped the small bracket on the cover. This meant it wouldn’t seat correctly when turned 180 degrees and I had to resort to taping up the hole with tarpaulin sheeting to try and keep out the water until the cover could be repaired.

Other jobs have been completed and Mick has organised an electronic copy to be made of our VMOI . This is essentially the ‘Haynes manual ‘ for all jobs required on our class 56. It sets out the scope of the job, the materials needed and the frequency with which the job needs to be undertaken.

We are using the VMOI to carry out a B examination on 56006 and working our way through the list of jobs required. Some are quite technical , but many are straightforward checks and cleaning / painting type jobs which are ideal for any new volunteers wanting to learn their way around a class 56.

Other less glamourous jobs has been the erection of racking in the container at Bury. This racking was kindly donated by my employer.