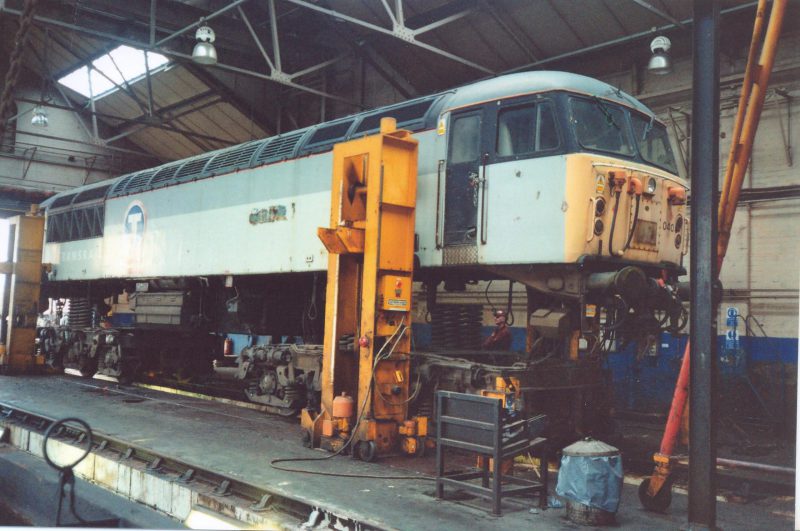 56040 was built at BREL Doncaster and delivered new to Toton in February 1978. In September 1979 the loco was transferred to Cardiff Canton to form the small Western Region fleet for use on heavy coal , steel and freightliner trains. The most famous working was the Port Talbot to Llanwern iron ore tains where pairs of 56’s replaced triple headed 37’s .

Many of the original WR allocation were transferred away to other WR depots or back to the LMR but 56040 managed to be based at Canton until September 1997. The fact the locomotive had been named Oystermouth meant it and the other WR named locos such as 56035,56037 & 56038 remained at Canton for longer than the other unnamed locos.

Whilst at Cardiff the loco had been part of the Trianload freight pool. Spending the period from the 1987 inception of sectorisation until April 1991 base in the Construction pool which was outbased at Westbury for Mendip stone traffic. The Next three years were spent in the Trainload Metals pool until March 1994 when 56040 was allocated to the Loadhaul LNBK pool based back at Canton.

When the railway was privatised , Immingham was the destination when 56040 was again uprooted from the Western Region and the loco became part of the English Welsh & Scottish FDBI pool . Once EWS had decided on their own pool codes 56040 became part of the WGAN System Wide pool. A short period in store from Feb 2000 to May 2000 saw the loco briefly reinstated until final withdrawal in October 2000 when EWS were starting to run down the 56 fleet as more of the GM class 66’s entered service.

The loco remained at Immingham until EWS offered the locomotive for sale in 2005. Purchased by the Class 56 Group the loco had spells based on the Mid Norfolk Railway , the Battlefield line at Shackerstone before finally relocating to Barrow Hill. By the time the loco reached Barrow Hill it the locomotive had developed two defective traction motors and a undetermined alternator fault. The repairs were going to be expensive and around the time we were deciding how to fund the repairs Fastline Freight went into receivership and 56301 & 56302 were on the market at a price we still find hard to believe. Rather than persevere with 56040 we purchased 56 301. We’d have liked to have kept 56040 but the funds were not available despite an appeal to raise funds to save her going for scrap. Ultimately 56301 replaced 56040 which was cut up at TJ Thompson , Stockton.